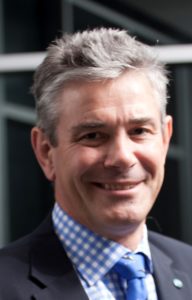 Keith McLean has a Ph.D. in microbiology from the University of Aberdeen, Scotland where he developed expertise in oilfield microbiology, biofouling and bacterial surface interactions. Following spells in industry and postdoctoral fellowships in New Zealand and Australia he joined the surface chemistry group at the Commonwealth Scientific and Industrial Research Organisation (CSIRO) in 1996 working on surface modification and characterisation for ophthalmic and other polymeric biomaterials applications. He was a team member (1996 – 2008) and project leader (from 2003 to 2005) of the implantable contact lens project in the VisionCRC. This team designed a polymer, surface and surgical methods for an implantable contact lens application and entered a phase 1 clinical trial and was being commercialised by Adventus Technologies. This team won the 2004 Royal Societies of Australia Eureka Award for Interdisciplinary Research and the 2009 CSIRO Medal for Research Achievement. He became the Research Leader for Biomedical Materials and Devices in CSIRO from 2004 to 2014 leading a 75 member team of polymer and surface chemists and biologists developing biomaterials for tissue engineering, stem cell propagation and implantable devices. In this role McLean had responsibility for the initiation, planning, development and management of multidisciplinary research projects in biomaterials within CSIRO and with external collaborators and clients. These include Cooperative Research CentreŠ—Ès, universities and companies both nationally and internationally. Members of the CSIRO Biomaterials team delivered significant commercial impact through, for example, the development of a second-generation extended wear contact lens and the launch of several spin-off companies (eg. PolyNovo Biomaterials; Polyactiva and Adventus Technologies).  He was also the Program Leader for Biopolymers in the Cooperative Research Centre for Polymers and Project Leader of the Biomanufacturing Project the aim of which was to develop novel materials for stem cell proliferation (2008-2012).

In July 2014 McLean became Director of CSIRO Manufacturing where has is responsible for >400 Staff and >300 Students and Affiliates and a budget in excess of $100m. McLean has responsibility for all aspects of the Manufacturing Business Unit Strategy including Science; Industry Engagement; Financial Performance; People and Culture and Health and Safety.

Method of immobilisation of carboxymethyl-dextran affects resistance to tissue colonisation. Colloids and Surfaces B: Biointerfaces, 18, 221 (2000)

The development of a synthetic onlay for the correction of refractive error. Biomaterials, 22, 3319 (2001)

Approaches to improving the biocompatibility of porous perfluoropolyethers for ophthalmic applications. Biomaterials, 27, 1287.

Effect of the Structure of Polysaccharide Coatings on Protein Adsorption. Colloids and Surfaces B: Biointerfaces 17: 37 (2000)

Self-assembly of ciprofloxacin and a tripeptide into an antimicrobial nanostructured hydrogel. Biomaterials, 34, 3678