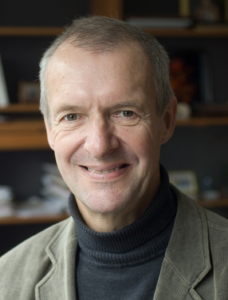 He was until 2009 heading a research group of up to ca. 40 persons active in Surface Science, Nanoscience and Nanotechnology, Biomedical Materials, Catalysis for emission cleaning, and Sustainable Energy. He has received grants to build multicenter programs in Biomaterials, Bicocompatible materials, Photo Active Nanostructures and Nanotechnology for Sustainable Energy and Environment (N2E2). He was initiator and co-founder 1995 of the still successful Competence Center for Catalysis at Chalmers, in the area of Automotive Catalytic Emission Cleaning.

He is member of the Royal Swedish Academy of Sciences (KVA) and the Royal Swedish Academy of Engineering Sciences (IVA). He served one period as vice president for the latter. He has been member of the Selection Committee of the Millenium Technology Price, Finland, of the Beirat of Fritz Haber Institute Berlin (Max Planck Institute), of the SAB of Materials Science Department at ETH, of the SAB of Catalysis for Sustainable Energy at DTU Copenhagen. He was Chairman of the Scientific Board of the Volvo Research and Education Foundation 2001-2011 (program on Future Urban Transport).

Awards include Gold Medal Large Size from IVA, the George Winter award from the European Society for Biomaterials, the Akzo-Nobel Prize from IVA, and Doctor Technices Honoris Causa at DTU, Copenhagen.

He co-founded several start the start-up companies; he initiated and co-founded Q-Sense AB 1996 and Insplorion AB 2010. For both companies he served as Chairman of the BoD during the initial years. When Q-Sense AB was acquired by the (Small Cap) listed company Biolin Scientific he became a member of its Board of Directors for 7 years.