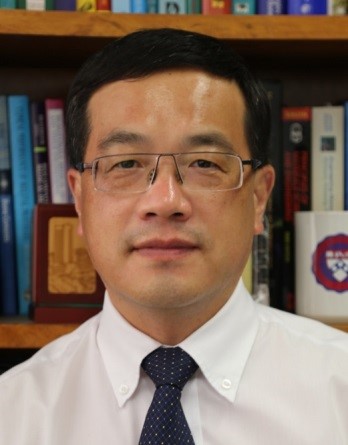 Min Wang is a professor in the Department of Mechanical Engineering of The University of Hong Kong (HKU). As Programme Director, he led HKU’s inter-faculty Medical Engineering Programme (retitled now as “Biomedical Engineering Programme”) in 2013-2018. He was awarded PhD degree by the University of London, U.K., in 1991. He has worked in universities in the U.K. (1991-1997), Singapore (1997-2002) and Hong Kong (2002-Present) and has been a Guest Professor or Adjunct Professor of several universities in mainland China (Shanghai Jiao Tong University, Zhejiang University, Tianjin University, Southwest Jiaotong University, South China University of Technology, etc.). He is a Chartered Engineer (CEng, 1995, U.K.) and a Chartered Scientist (CSci, 2005, U.K.). Owing to his scientific and technological contributions and achievements, he has been elected a fellow of UK’s Institute of Materials, Minerals and Mining (FIMMM, 2001), a fellow of UK’s Institution of Mechanical Engineers (FIMechE, 2007), a fellow of the Hong Kong Institution of Engineers (FHKIE, 2010), Fellow of Biomaterials Science and Engineering (FBSE, 2012) in the International Union of Societies for Biomaterials Science and Engineering (IUS-BSE), a fellow of the American Institute for Medical and Biological Engineering (FAIMBE, 2012), and a member of the World Academy of Ceramics (WAC Academician, 2013). Since 1991, he has been conducting research in biomaterials and tissue engineering and is a leading researcher in biomedical composites. Among his notable achievements, he has conducted seminal research on non-porous bioactive composites for human hard tissue repair, performed pioneering research on 3D printing of novel tissue engineering scaffolds, and made distinctive contributions to the research of bioceramics, bioactive and protective coatings, multifunctional scaffolds for tissue regeneration, theranostics, and combination devices. He has authored a large number of publications in books, journals and conference proceedings. His research has been widely cited by other researchers in many countries. He and his research staff / students have won many awards for their research. For his research work, he has given many conference presentations, including more than 170 invited talks, at international conferences. He has also given more than 110 seminars in universities, research institutes or hospitals in Western Europe, North America, Asia and Australia. He has provided consultancy on biomaterials and biomedical engineering to multinational companies headquartered in the U.K., U.S.A. or Hong Kong. His current research focuses on nano-biomaterials, advanced multifunctional tissue engineering scaffolds and 3D printing in tissue engineering. Since 1997 when he was in Singapore, he has been involved in biomedical engineering education and training. At different universities, he set up and taught/teach course in biomedical engineering, biomechanics, and biomedical materials and tissue engineering at both undergraduate and postgraduate levels, as well as teaching in professional courses and workshops for clinicians. He has given talks on biomedical engineering education and training in premier conferences such as IUPESM World Congress of Medical Physics and Biomedical Engineering (Prague, Czech Republic, 2018).

Dr. Wang has also made exceptional professional contributions. Since 1990, he has reviewed manuscript submissions for more than 110 international scientific journals (including all top biomaterials and tissue engineering journals) in the fields of materials science and engineering, biomaterials and tissue engineering, physics, chemistry, dentistry, medicine, medical devices, surface engineering, biofabrication, nanoscience, nanotechnology and 3D printing. Since its inception in 2012, he has been the Series Editor of SPRINGER NATURE’s books series Springer Series in Biomaterials Science and Engineering. He is an Editorial Board member of Elsevier’s Encyclopedia of Biomedical Engineering. He has also been an Editor / Associate Editor / Regional Editor of several international journals (Materials Letters, Medical & Biological Engineering & Computing, Nano LIFE, etc.) and has served as an Editorial Board member of 20 international, printed journals, including (1) Journal of Materials Science: Materials in Medicine (2004-Present, Springer), (2) Biomedical Materials (2006-2012, IOP, UK), (3) IET Nanobiotechnology (2007-2019, IET, UK), (4) Journal of Orthopaedic Translation (2014-Present, Elsevier), (5) Biomaterials Research (2014-Present, Korean Society for Biomaterials, Korea), (6) Composites Science and Technology (2006-Present, Elsevier), (7) Surface and Coatings Technology (2004-2015; Elsevier), (8) Journal of the Royal Society Interface (2010-2016; The Royal Society, London, UK), (9) International Materials Reviews (2014-Present, IOM3, UK), and (10) Ceramics International (2018-Present, Elsevier). Since 2000, he has reviewed research grant applications for national/international research councils / funding agencies of various countries (U.S.A., European Commission, Germany, Switzerland, Czech Republic, Singapore, Australia, New Zealand, etc.) and has served in the Engineering Panel of Hong Kong’s Research Grants Council and the Biophysics and Biomedical Engineering Panel of China’s National Natural Science Foundation. Since 1999, he has served as Chairman and/or Organizer (or Co-Chair / Co-organizer) of 26 international conferences / symposia / workshops, including symposia / workshop in the World Biomaterials Congress (7th WBC, Sydney, 2004; 8th WBC, Amsterdam, 2008; 9th WBC, Chengdu, 2012; and 11th WBC, Glasgow, 2020). He has also served in committees of more than 70 conferences. He has taken leadership roles in professional societies at local, national and international levels. He was Chairman of the Biomedical Division of Hong Kong Institution of Engineers. He has been an elected Council Member of China’s Chinese Society for Biomaterials (CSBM), Hong Kong Institution of Engineers, Asian Biomaterials Federation, World Association for Chinese Biomedical Engineers (WACBE), and the International Federation for Medical and Biological Engineering (IFMBE). In 2016, he was elected a member of the Steering Committee (2016-2020) of International College of Fellows – Biomaterials Science & Engineering (ICF-BSE). For the biomedical industry, he serves as a member of Hong Kong’s Engineers Registration Board, a member of the Admission Panel for Incubation Programmes of Hong Kong Science and Technology Parks, and an Honorary Advisor of Hong Kong Medical and Healthcare Device Industries Association (HKMHDIA)

I have been actively engaging myself in professional societies; and serving in different roles in these societies makes me feel fulfilled as my service can/could help many others to receive the benefits from the societies and also help the societies and disciplines to advance in the rapidly changing world. ICF-BSE is a home for FBSEs and it can promote collaborations among FBSEs as well as researchers of different continents. Very importantly, FBSEs are international leaders in the biomaterials and tissue engineering field and are role models for the new generations of biomaterials scientists and engineers. Using FBSEs’ pioneering and exemplary work and their national and international prominence and through organizing various activities, ICF-BSE can greatly help to advance the disciplines of biomaterials and tissue engineering.

In 2016, I was elected a member of the Steering Committee of ICF-BSE for the 2016-2020 session. Over the past three and half years, under the leadership of Committee Chair, we have made a number of significant achievements for the international biomaterials community. ICF-BSE continues to support national and regional biomaterials congresses, with special Fellows’ Sessions being organized in these conferences and hot topics/issues being debated. The exchange program for young researchers is supported and promoted. The voluntary ICF-BSE membership contribution system is established. And ICF-BSE now has the power to nominate a few FBSE candidates to IUS-BSE every four years, which is very important as the worthy, ICF-BSE nominated FBSE candidates come from countries/regions not represented by IUS-BSE constituent societies, for example, South Africa. The selection of ICF-BSE nominated FBSE candidates is stringent in ICF-BSE (as you want the new ICF-BSE peers to be as good as you are); and at the 11th World Biomaterials Congress this year, the world biomaterials community will see the induction of the first FBSEs nominated by ICF-BSE. We hope and believe that these ICF-BSE nominated FBSEs are the seeds in the countries for starting their biomaterials societies and that ICF-BSE and IUS-BSE will truly unite biomaterials researchers around the world. ICF-BSE is not static and is making things to happen.

Witnessing the changes and advances that we have made in the current session and envisaging the activities and advances that we can make in the next session, I am seeking to be re-elected to the Steering Committee of ICF-BSE for 2020-2024. If elected, I shall work with other committee members for the advancement of the disciplines, for promoting and supporting exchanges and communications inside and outside ICF-BSE, for initiating new and beneficial activities by ICF-BSE, for increasing the visibility of ICF-BSE, for shaping the future of ICF-BSE, and for the growth of the international biomaterials community. For all these reasons, I am passionate about serving in the ICF-BSE Steering Committee for another term.