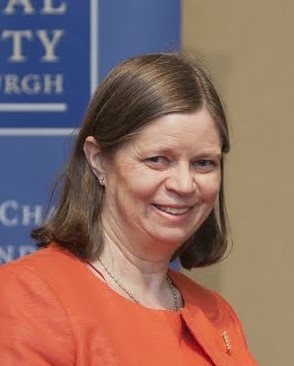 Liz’s current duties including directing the Institute of Bioengineering one of the three cross school research institutes, in this case combining activities in the School of Engineering and Materials Science, School of Physics and Astronomy and School of Chemistry and Biological Sciences with Barts and The London School of Medicine and Dentistry and health service staff based in the Royal London and St Bartholomew’s Hospitals.

After completing her DPhil at the University of Oxford in the Department of Engineering Science and the Nuffield Orthopaedic Centre working on external fracture fixation, Liz moved as a Post Doc to at Queen Mary College, University of London working for Professor Bill Bonfield. She remained there until 2007, gaining an academic position in 1993 and becoming Professor of Biomedical Materials in 1998. In the 1990s she was one of the core staff of the IRC in Biomedical Materials, the nationally funded biomaterials research centre. During her time at QMUL she was also Deputy Director of the IRC in Biomedical Materials and Dean of Engineering.

In parallel with her time as Professor in both QMUL and the University of Glasgow she was a Visiting Professor of Biomaterials and Biomechanics in the Department of Orthopaedics at Lund University Sweden. In 2017 Lund University awarded her a PhD(Hon Caus) from the Faculty of Medicine.

She has first supervised over 30 PhD students, with many more as second supervisor, in these universities, generally ensuring that the candidates have had clinical or biological supervision in parallel with their materials or engineering supervision to ensure the clinical applicability.

In 2018 she returned to Queen Mary University of London as the Bonfield Professor of Biomedical Materials.

She has been a member of or is currently on the Editorial Boards of Journal of Materials Science: Materials in Medicine, Journal of the Royal Society Interface, Biomedical Materials, Journal of Applied Biomaterials and Biomechanics and Proceedings of the Institution of Mechanical Engineers, Part H: Journal of Engineering in Medicine where she has been Associate Editor since 2014.

In 2016 she was made an Officer of the Order of the British Empire (OBE) for her work in Biomaterials and Medical Engineering.

I have served on the committee of the International College of Fellows (ICF) of the International Union of Societies in Biomaterials Science and Engineering (IUSBSE) for the last four years. I hope to serve a second term and to continue to contribute to the activities of the ICF.

During my time I have been delighted to see the growth and range of activity of the ICF in the IUSBSE and our constituent societies. We are all well acquainted with the aging population and their problems, and these problems will be solved more effectively if the world biomaterials community works together. We will train stronger and more effective young biomaterials scientists and engineers with international collaboration.

If elected I will continue to support such activity as the Debates and Discussions on controversial ideas in biomaterials. These ensure that both the younger and developing and longer standing members of the biomaterials community think about the application of novel biomaterials, how they will influence future clinical treatments etc. I would aim to encourage the development of Young Scientists Forums throughout the international biomaterials community. By working together the next generation of biomaterials scientists and engineers will improve their own training and advise on their training needs.

And finally, of course, I will support the Korean Society for Biomaterials in the run-up to the 2024 Congress.