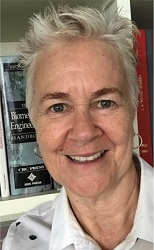 Laura was recently awarded the Member of the Order of Australia (AM) and is a Fellow of three learned academies, ATSE, AIMBE and BSE She is an Associate Editor of Biomaterials and on the editorial board of the Journal of Neural Engineering. Laura has made significant contributions to development of new bioactive materials and to understanding compatibility of bioactive materials with cells and tissues. She has also held appointments in industry, with regulatory bodies and served in university leadership roles. Laura was responsible for leading the incorporation of the Australian Council for Graduate Research in 2015 and the UNSW Athena SWAN gender equity program from 2015 to 2018.

Laura has played an active role in leadership of the Australasian Society for Biomaterials and Tissue Engineering (ASBTE) serving as President from 2004 to 2006; the International Union of Biomaterials Science and Engineering (IUSBSE) as an Australian delegate for several years; and the International College of Fellows (ICF-BSE) as secretary since 2016. Her leadership and service were recognised by ASBTE in 2017 by the Award of Excellence. She was awarded the international Fellowship (FBSE) in 2012.
Having served in several University and Professional leadership roles, Laura has extensive governance experience and had contributed to development of strategy and policy. In her University leadership role between 2010 and 2018, Laura provided strategic leadership in the Division of Research and was responsible for the direction, development and improvement of UNSW’s overall research performance. Her role as PVCRT contributed to performance through leadership of the UNSW higher degree research portfolio and attracting and retaining outstanding higher degree research candidates; attracting and retaining exceptional early to mid-career researchers; systematic development of researcher skills, spanning from PhD to research leader; and driving international research strategy in collaboration with other PVCs in the Research Division and the External Relations Division.

A seminal achievement during Laura’s tenure was development of key programs under UNSW Strategy 2025 including initiation and leadership of the UNSW Scientia PhD Scholarship Scheme and the UNSW Scientia Fellowship Program. Commitment by UNSW of $500million in strategic investment to these two programs over the life of the Strategy, is expected to recruit and retain 300 research focused academics and attract 700 PhD scholars through to 2025.

Laura has supervised to completion 25 higher degree research students and more than 50 Masters and undergraduate thesis students. She has also supervised and mentored several post-doctoral fellows and is actively involved in Faculty academic mentoring programs, and mentoring and developing early career researchers in the University and ASBTE.

Laura has attracted significant external grant funding with a large proportion from prestigious Australian Research Council (ARC) and industry/end-user engaged grants, including over the past 15 years, 4 ARC Discovery grants, and 3 ARC Linkage grants awarded with different Australian and International companies. Her grants over the last 5 years include national and international grants through the ARC, the National Health and Medical Research Council (NHMRC), and the US Defense Advanced Research Agency (DARPA).

Laura is a key player in the global BME community with significant impacts including engagement in organizing global conferences in biomaterials (2020 World Biomaterials Congress; 2016 World Biomaterials Congress and 2015 World Congress on Medical Physics and Biomedical Engineering).
Laura has played key roles in industry linked research projects and plays a lead role in developing clinical linkages in Biomedical Engineering at UNSW. While Pre-Clinical Scientist for a US based start-up company from 1999 to 2001, she also contributed to the development of new hydrogel-based implantable devices Bead Block® and LiquiGel embolic agents (Bead Block® licensed to Biocompatibles UK with sales of over £13 million in 2009).
Laura contributes to the Brain Research community through her lead role on the Executive of the Australian Brain Alliance and was recently a contributing author on a paper relating to a neuro-ethics framework for the Australian Brain Initiative. She also contributes to the community through acting as a judge on the Eureka Prize Awards, the ATSE Clunies Ross Awards and as a reviewer for ARC Discovery, DECRA and NHMRC Development Awards.

Laura has over 120 peer-reviewed publications, with ~4000 citations and an h-index of 35. Her papers largely appear in first quartile journals. She has also been granted 2 patents relating to biomedical materials and has one on conducting elastomers that is under examination. Her research track record reflects her high commitment to leadership roles over the past 15 years and her commitment to mentoring early career academics.

If elected, I am committed to working with the Steering Committee to focus on three key aspects of the International College of Fellows (ICF): sustainability; outreach and College recognition; and meeting the professional needs of our Fellows. First, the sustainability of ICF operation. Currently, the College operations are dependent for support on the resources of the incumbent Chair, goodwill of the steering Committee and the small level of funds donated by Fellows. It is important for the future sustainability of the ICF to ensure that the mechanisms in place to support operation into the future are appropriate and workable. Second, the expert professional status of the College. Professional status of the FBSE is excellent among the Biomaterials community, however has less broad recognition in the wider scientific community and general public. By examining operations of other, similar bodies and engaging with current Fellows across all member Societies, a strategy for increasing recognition of our Fellows expertise will be developed. Finally, I am committed to gaining a better understanding of the professional needs of our Fellows, and working with the Steering Committee to provide appropriate activities and opportunities.