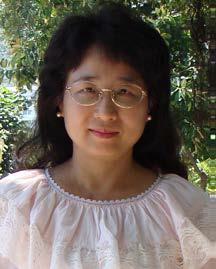 Dr. Lynn L.H. Huang obtained her B.S. and M.S. degrees from the Department of Agricultural Chemistry at the National Taiwan University in Taiwan at 1983 and 1985. With background in biochemistry and nutrition, she later joined Professor Marcel E. Nimni’s Laboratory of Connective Tissue and Skeletal Anomalies at the Orthopaedic Hospital of Los Angeles in 1987 and obtained her Ph.D. degree at 1993 from the Institute of Biochemistry and Molecular Biology in the School of Medicine at the University of Southern California, USA. She was granted a Student Award for Outstanding Research by the American Society for Biomaterials in 1989. She later had short experience at the Department of Surgical Research at the Children’s Hospital of Los Angeles in Hollywood, California, USA.

Dr. Huang was recruited as a Research Assistant Professor at the Center for Biomedical Engineering in the College of Medicine from the National Taiwan University in 1993. She was promoted to a Research Associate Professorship a year later and served as an Adjunct Associate Professor in the Graduate Institute of Oral Biology in the College of Medicine at the National Taiwan University since 1997. She established cell culture facilities for colleagues, developed collagen research and made the collagen knowledge well-known by people. This inspired the development of many collagen companies in Taiwan and boosted the establishment of Biomedical Center at the Industrial Technology Research Institute.

Dr. Huang assisted the establishment of the Institute of Biotechnology at the National Cheng Kung University and served as an Associate Professor in 1998 and was then promoted to a full Professorship in 1999. During Aug. 2003 to Feb. 2004, she served as a Visiting Professor in the Department of Surgery at the Stanford University School of Medicine in Palo Alto, California, USA, where she joined Dr. Michael Longaker’s lab. She was later invited with join appointments at the Institute of Clinical Medicine since 2006 and the Department of Food Safety / Hygiene and Risk Management since 2019 in the College of Medicine at the National Cheng Kung University. In 2015, she urged the establishment of the Department of Biotechnology and Bioindustry Sciences in the College of Bioscience and Biotechnology. Now, she is the Distinguished Professor at the University.

Since 2008, Dr. Huang was elected as a fellow of Biomaterials Science and Engineering (FBSE) because of her significant contributions in research and education. Except numerous research awards and innovation awards, she was awarded Lifetime Achievement Inventor in 2014. She served as a Taiwan delegate in the International Union of Societies for Biomaterials and Engineering for 18 years. She served as an editorial honorary advisory board member for the “Journal of Biomaterials and Tissue Engineering” since 2010.

She has been working in the fields of extracellular matrix biochemistry and biomaterials for over 35 years and was the first person proposed a non-contractible collagen-hyaluronan matrix in the world. Her expertise is in biochemistry of collagen and hyaluronan, biomaterials, tissue engineering, cell biology, 3-dimensional culture, biocompatibility, animal wound healing models, etc. Her lab has successfully established a series of novel non-contractible porous collagen-glycosaminoglycan scaffolds and the plasticity of mesenchymal stem cells by extracellular microenvironment. Recently, with a strict non-regenerative hind limb ischemia model in diabetic mice, she has invented certain novel drugs for the ischemic treatment to prevent limb amputation. She now has over 82 international patents approved, about 70 peer-reviewed scientific papers published, over 142 conference papers presented and 11 book chapters written.